A few years ago, great lawyers who are pioneers in our field, tried to blaze a trail alleging fraud in a foreclosure case. The case went all the way up to the Supreme Court of Florida. Despite finding that “many, many mortgage foreclosures appeared to be tainted with suspect documents,” the Court ultimately held that since the bank didn’t get away with it, it’s not fraud. Pino v. Bank of New York, 121 So. 3d 23 (Fla. 2013). The Florida Supreme Court would not even commit to stating that sanctions would be warranted for the bank’s attempted use of fabricated evidence. Id.

Before the case reached the highest court in our state, Justice Polen relayed the words of Justice Farmer, writing that:

Decision-making in our courts depends on genuine, reliable evidence. The system cannot tolerate even an attempted use of fraudulent documents and false evidence in our courts. The judicial branch long ago recognized its responsibility to deal with, and punish, the attempted use of false and fraudulent evidence. When such an attempt has been colorably raised by a party, courts must be most vigilant to address the issue and pursue it to a resolution.

Ever since the Supreme Court handed us the Pino decision, I have been very reluctant to mentioned the word “fraud” in a foreclosure case.  It’s not because I don’t believe fraud exists or because I agree with the Supreme Court over Justices Polen and Farmer. But rather because, for numerous reasons, raising fraud most often only hurts our cause. I will go so far as using “false documents,” when warranted but when it comes to “fraud,” I believe it is far more effective to lead the judge up to that without saying it. Pointing out the facts and law, as a devoted professional, with limited ire, is far more effective. With this approach, I have recently watched two judges raise fraud all on their own – one of which was the impetus for this post.

During a recent trial, I published the following evidence to the Court:

From Note attached to complaint and provided to me in 5 sets of pre-trial exhibit disclosures (Note 1): 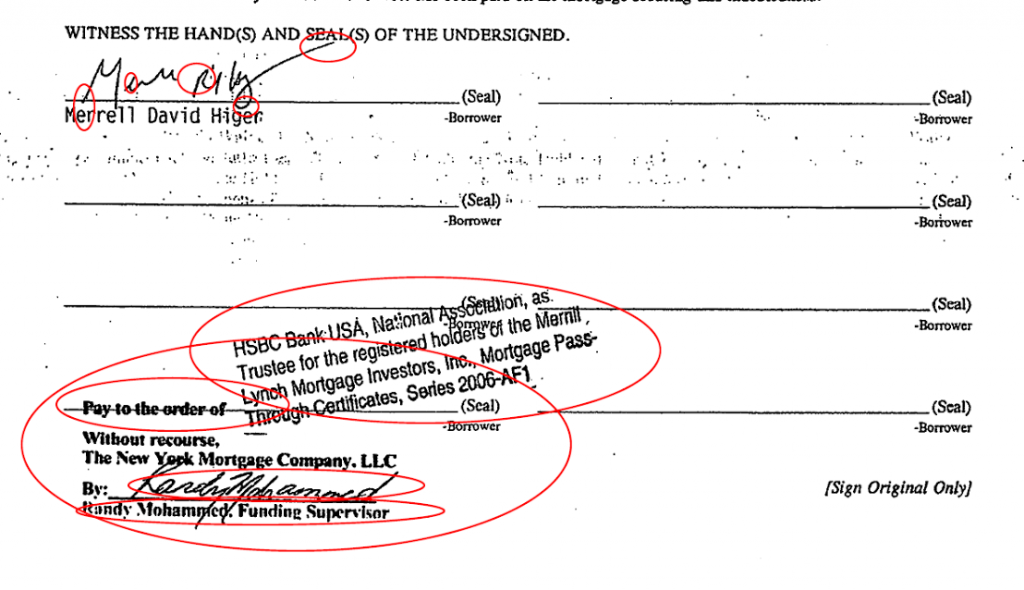 Clearly, these two copies of “originals” are different in major ways. Even if there are two notes, which there should never be, the notes should not be enforceable by two different entities.

I also informed the court that the Bank’s Request for Admissions response #10 says that Note 1 is a true and accurate copy. The Complaint is verified to be “true and accurate” and the bank pleads that they are the holder (i.e. in possession and payable to blank or to the Plaintiff). Yet, the Plaintiff is CitiMortgage and the Note attached to the complaint (“Note 1”) was specially indorsed to a trust. Meanwhile, the Lost Note affidavit states Note 2 is a true and accurate copy and Bank’s Response to Interrogatory #7, filed in early June, claims the note is at HSBC in New York City and is not lost!

Despite my and the Judge’s clear warning of where this was headed, opposing counsel failed time and time again to recognize the severity of the situation. Finally, after the Court threatened the bank’s attorney and bank with an evidentiary hearing on the Court’s own motion for fraud on the court to dismiss the case with prejudice so that the bank could never sue again, the bank took a voluntary dismissal.

THE COURT: You know, you’re saying that. Are you thinking about the ramifications of that also, because it seems to me like it would almost be a Motion for Fraud upon the Court, in which to dismiss this case with prejudice and it never being brought back to Court…. So, if you wish to have an evidentiary hearing on the matter, I think it should be set up as a Motion for Fraud upon the Court, truly at this point in time if you wish to move forward.

BANK LAWYER: Your Honor, at this point the Plaintiff will voluntarily [dismiss] the action so we can clean the issues and refile the case.

I can only imagine what he means by “clean the issues”…