Foreclosure Fight Club: Another Trial, Another Win by The Law Offices of Evan M. Rosen (Part 2)

In part one of this series, we started to tell the story of one of our latest Foreclosure wins.

We left off with…

THE COURT: 7:30 Tuesday, we can bring all the motions. I’m going to tell you right now. I do not issue orders for people to disobey them and I have been known to sanction people a lot of money because I believe that the only way that I can get people to comply is to make it hurt.

THE COURT: So whoever shows up, beware that if I find that my orders have not been complied with, there’s going to be hell to pay.

Now, we continue with snips from the trial transcript which tells the story of what happened next…

THE COURT: Okay. I am going to begin by saying that when I write these trials orders, I’m not doing it for my own personal entertainment.

As you all know, I think I’m a nice guy, but I mean what I say and I say what I mean.

Why is it that the same problem keeps on reoccurring with the Plaintiff not listing witnesses as I have ordered? This is not a request. This is an order.

OPPOSING COUNSEL: I do understand that, Your Honor, and certainly we take these things very seriously.

THE COURT: But, you know, my impression is that this nothing new. Do you understand?

My impression is that these law firms don’t take this stuff seriously, and there has got to be a price to pay. There has to be a price to pay because the only time that I get people to understand that I’m serious is when I make it hurt and there are consequences. I have had enough of this.

THE COURT: Okay. This lawyer is a fine lawyer.

THE COURT: He is an honest man. He does the best that he can. He prepares. He takes this stuff seriously.

Let’s talk about that. And I’m talking about a stiff sanction. I’m not talking about a couple of thousand bucks, so in the end it may be cheaper for you to re-file this case than what I’m thinking of, but I’ll listen. It’s your motion first.

EVAN ROSEN: Thank you, Your Honor. I appreciate your taking the time to review our motion and taking it as seriously as you have and always have in taking our motions.

THE COURT: And I’m going to interrupt you there and say that no good deed goes unpunished because what I should have done is strike the witness list and that would ended the case right there and then, but instead I tried to give you ample opportunity because I believe both sides need to be heard, and that was not appreciated or respected.

OPPOSING COUNSEL: Before this Court makes its ruling, the Plaintiff needs to be heard obviously, Your Honor.

OPPOSING COUNSEL: Okay. First of all, I’ve got an affidavit as to the certificate of service, and the affidavit basically says that it was sent without the trial order attached due to inadvertence, neglect, and mistake.

OPPOSING COUNSEL: Well, here’s the facts, Your Honor, and I checked this out thoroughly. I talked to the attorney and the legal assistant who was involved in thoroughly, and I asked the legal assistant to execute an affidavit. She was very, very thorough about this because she didn’t want to say anything in that affidavit that wasn’t absolutely true.

The bottom line is, as far as this affidavit goes, is that Plaintiff’s Firm didn’t get the trial order, and I’m sure that there is different reasons for that. We’ve had ongoing issues with proper service lists. This Court has addressed that with different requirements.

However, what ends up happening is that the overburdening of the Courts due to the foreclosure crisis has caused the Courts to shift the burden to the Plaintiff’s Firms, and what happens is where a trial order that normally would have been sent by the Clerk of Courts is now required to be sent by the Plaintiffs, and Plaintiffs Firms are just as busy as the Courts and Defense Firms, but this burden remains firmly on the shoulders of the Plaintiffs and that an unfair burden.

Even so, and I don’t know what the background and the reason for not having the particular trial order that the Court issued, the certificate of service was sent by mistake without the trial order attached to it, and there is no question, that’s just a fact and Plaintiff would stipulate to that fact.

However, there is no attempt to mislead the Courts, mislead the Clerk, mislead opposing counsel, and the certificate of service was executed in a–

THE COURT: Let me interrupt you for a second. If I thought that that was the case, I would be reporting somebody to the Bar.

The case here is that this lawyer is being inconvenienced and he is incurring costs unjustifiably.

OPPOSING COUNSEL: Well, I would say that regardless of the allegations as to false certificates of service and the reasons therefore, it was Plaintiff’s intent to provide as much notice as it was able to, to opposing counsel. And what happened here and what is in this affidavit is that the Plaintiff only discovered–

THE COURT: Let me read that affidavit.

OPPOSING COUNSEL: The Plaintiff only discovered–

THE COURT: Did you get a chance to read this?

EVAN ROSEN: I have not seen it. This is the first I’ve heard of it, Your Honor.

THE COURT: I’m going to look at it, but I’ve got to tell you this is the pattern. This is demonstrative of what’s going on.

OPPOSING COUNSEL: Your Honor, I respectfully disagree and here’s the reason why. When we discovered — when this Firm was provided notice that the trial order was not attached to the original certificate of service that went out, Mr. Rosen brought that to our attention, and still not having a copy of the trial order, our Firm attached a copy of the docket, and served that by certificate of service in order to provide Mr. Rosen with as much notice as possible.

Not having the trial order, not having properly sent it out and certified that it was sent out, our Firm did everything in its power, control, and authority in order to provide Mr. Rosen with adequate notice of the trial, which was the best we could do.

Not having the trial order, we copied Mr. Rosen with a copy of the docket and listed the trial date thereon.

Now, obviously there is things in the trial order that are required to be performed and it has different deadlines, and so on and so forth in it. However, Plaintiff’s Firm didn’t have that, and I couldn’t tell you why.

THE COURT: I have to tell you that I would keep receipts of whether it was faxed to you or emailed to you. If it was emailed to you, the presumption is that you got, and if that is the case and your Firm is saying that you didn’t get it, you have a real big problem. I am going to dismiss this case involuntarily.

OPPOSING COUNSEL: Your Honor, I’ve got to object for the record, and if I may be heard?

OPPOSING COUNSEL: I think that remedy is too harsh, and I don’t think that the facts and circumstances here justify that. I don’t think there has been any finding of willfulness, wantonness, recklessness, or any facts that would rise to the level of a sanction of dismissal. Under the Kozel factors, which none have been met here, I think that it’s inappropriate.

THE COURT: Okay. Thank you.

I find that — let me make some findings. I find that after the first instance where this happened, I could have bought that argument, but this is the second one. And as a matter of fact, I distinctly remember telling the lawyer who was there at the trial, you’re on for August 23rd, so I don’t understand what this business of trial order because I specifically said there is nothing going to be coming forward, everything that was in the original trial will remain the same.

OPPOSING COUNSEL: That was me, Your Honor. I was at that trial.

THE COURT: So you must remember that.

OPPOSING COUNSEL: I have the order with me. We’re here, we’re ready to go.

THE COURT: It’s too late now. You can either — or I can sanction lots of money. I’m going to dismiss it.

OPPOSING COUNSEL: Thank you, Your Honor. 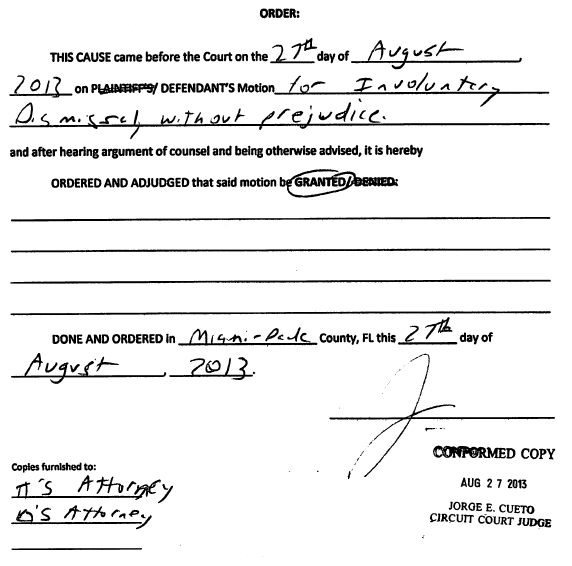 If you are in South Florida and are looking for help with debt, foreclosure, student loans, real estate or want more information about bankruptcy law, call us at (754) 400-5150 or fill out our online form for a FREE CONSULTATION. Let the lawyers and staff at the Law Offices of Evan M. Rosen serve you!

After the case was dismissed, we received the below letter from opposing counsel… 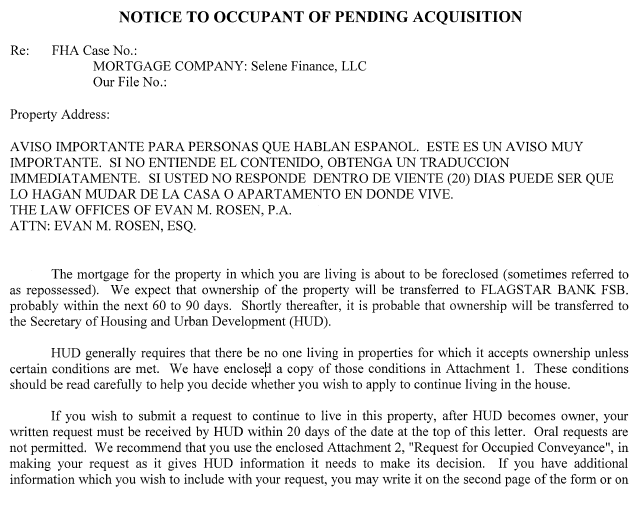 which is unfair, deceptive and materially false as evidenced by our extensive research as well as the letter (below) we received from Selene back in April 2013… 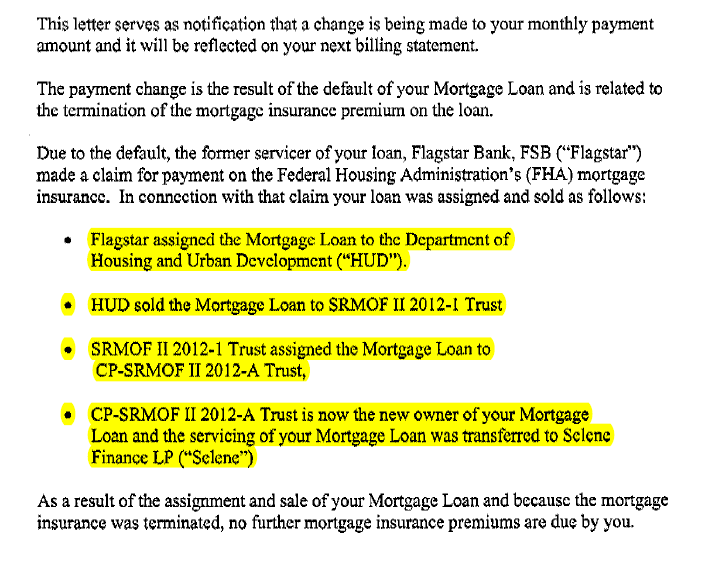