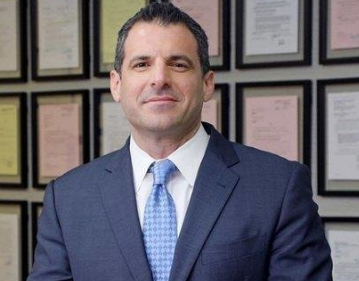 At two recent seminars, attended by hundreds of lawyers and a dozen or so judges, two judges publicly singled out Evan, praising him as an “excellent trial advocate” and a “wonderful lawyer.”  To read more about what some judges have said about Evan, click here, here, and here.

Evan Rosen is an attorney who helps people throughout Florida with real estate transactions, foreclosure defense, estate planning, and probate. Well before he became a lawyer, Evan was drawn to fighting for worthy causes, and drawn to real estate and law.

On his mother’s side of the family, his great grandfather, Max Weinstein, emigrated from Ukraine to New York. Max was one of those proverbial success stories. He came here with nothing and eventually bought, developed, and managed real estate in New York and New Jersey. Max became very successful.

Max married Esther and they had five children. The second child, Ruth, was Evan’s grandmother. She was born in 1916, shortly before the Spanish flu. When that pandemic came, Max had a choice, evict his tenants who did not pay and have a hard time finding new tenants, or just let his non-paying tenants stay. Either way, he was facing major financial upheaval. Max decided to let the non-paying tenants stay.

Undoubtedly, Max had to get creative to keep his real estate holdings intact. He got through the pandemic. But a decade later, the great depression came. And then another decade or so later, the world was at war. Around 1945, Max moved his family to Florida—looking for a fresh start. He resumed building properties but due to health and other reasons, Max was never able to recreate the real estate portfolio he once had. Shortly before Evan was born, Max Weinstein passed away.

Evan was named after Max. His middle name is Maxwell. And his “Hebrew” or Jewish name is Asher Mordecai. Asher is for Esther and Mordecai is for Max.

So, Evan suspects on some level, part of his spirit to serve people in real estate and to fight foreclosures comes from Max. No family member can confirm it, but they believe Max had to fight off foreclosures. And from what they know of him, Max would have done it honorably and ethically—as Evan does.

Evan heard stories about Max growing up and was always drawn to him. As a kid, there was a time Evan asked his parents to change his name to Max. In ninth grade, Evan told all his teachers to call him Max. Only he had no idea about the pandemic and the impact it had on Max and his family. Evan only knew that something about Max called to him, deeply and spiritually.

On Evan’s father’s side, his grandparents also bought, built, and managed real estate. His father’s father died when Evan’s dad was fourteen. Evan’s grandmother, Mary Rosen (formerly Mary Ratner), came from a family of Jewish/Russian immigrants. She bought and managed a significant amount of real estate, all while raising four boys. She did very well and died a very wealthy woman.

So—on both sides of his family—Evan grew up surrounded by people who had a passion for real estate. There were also many lawyers and judges. Some did all of the above, like Evan’s father.

Evan’s family holiday dinners regularly involved twenty to thirty people. (Even run-of-the-mill weekend meals were regularly ten or more people.) Evan also had these big New Year’s Day get-togethers with about fifty or so people. And through it all, there was a lot of law and real estate talk. (As a kid, the lawyers Evan knew spoke primarily of service, and overcoming challenges, and finding and making opportunities for personal, professional, and spiritual growth. Until Evan started practicing law, he never understood all the bad lawyer jokes.)

At these large family gatherings, while Evan enjoyed the food and playing with other kids, he remembers spending a lot of time with the adults. After meals, Evan was the only kid still at the table—often leaning in, elbows on the table, listening to all the law and real estate talk. When the adults had talked enough and got up from the table (or started playing cards which they did from time to time), that’s when Evan would part ways and join the other kids.

This is who Evan is. But there is more to him than just this.

For example, in grade school, Evan stood up to a bully on the school bus. He was much bigger than Evan, but he was picking on a young boy who was shy and much younger and smaller. Something pulled Evan out of his seat to say: “You have a problem with Curtis, you have a problem with me.” Evan had a little fight that got broken up. But that was the end of that kid bullying anyone on the bus.

This too is who Evan is.

In high school, seeking an outlet for his spirit to fight and overcome adversity, Evan wrestled on the varsity team in different weight classes. He held his own but looking back, it did not give him the meaning he was looking for.

During this time, Evan also found his way into team debate. Evan and his debate partner traveled around the country. They won some major tournaments and had a lot of fun. Through debate, Evan found his voice and a creative outlet. But he was debating mostly hypothetical issues. No real people were impacted by whether Evan won or lost the debate. So like wrestling, debate was fun, but it did not give Evan the meaning he sought. Still, those activities provided the foundation to help him as a lawyer—to fight, be creative, and never give up on a just cause.

Evan attended Pine Crest Preparatory School in Fort Lauderdale from kindergarten through high school graduation. For college, he attended the University of Miami on an academic scholarship. And after graduating with honors, Evan obtained his juris doctorate degree from Nova Southeastern’s law school. By then, Evan was more eager than ever to get out in the world—to make a difference. Something kept pushing him for more meaning in his life.

As a young lawyer, a couple years out of law school, Evan found more meaning than he could have imagined and was pushed way outside his comfort zone. After spending months (including late nights and weekends) preparing for a lengthy jury trial against Wal-Mart in a slip and fall case involving significant injuries, Evan ended up delivering the closing argument. The jury returned the seventh largest verdict in Broward County that year. Evan cried tears of joy with his clients as the jury foreman read back the verdict.

For about fifteen years, Evan continued to exclusively handle, workers’ compensation, and medical malpractice cases. Towards the end of that, he obtained his real estate broker’s license and flipped a couple houses.

But then the foreclosure crisis came. Initially, Evan referred potential clients to other attorneys who were holding themselves our as helping others with “foreclosure defense,” but he quickly saw that many lawyers were just taking money to delay. This really bothered Evan, but he ultimately saw it as a great opportunity to serve people in a meaningful way. He dove in.

Evan never expected to win foreclosure defense cases, but he has won the great majority. And he has helped nearly every one of his clients in a profound way.

As part of this, Evan became a title agent with The Fund and started helping people buy, sell, and refinance real estate as a title and transactional real estate attorney. He also started teaching other lawyers the art and science of defending foreclosure cases at trial. And he later added estate planning and probate to the firm's practice areas.

Evan and the firm’s guiding philosophy in all practice areas is the golden rule—treat clients as we would want to be treated and treat clients’ cases as if they were our own.

Whenever faced with a difficult decision in a case, Evan always asks himself: How would he want this situation handled if it was his case? After that, the best course of action is often quickly determined.

Many years ago, Evan realized that for him a key to life was to figure out what your G-d given (or natural talents) are, and then figure out how you can use those to serve others in their pursuit of happiness. At a very basic level, people come to lawyers because they want to be happier in their lives and there is a legal challenge standing in the way. Evan tries hard to focus on helping people in their pursuit of happiness. And as part of that, Evan aims to treat his clients, team members, and referral sources, the way he wants to be treated.

If you or anyone you know needs help buying, selling, or refinancing real estate, defending against foreclosure, preparing estate documents, or probating an estate, please reach out.

Member of JEDTI - Jurists Engaged in Defending Title Integrity
An invitation only, statewide group of Florida attorneys who serve others in defense of foreclosure, preserve the integrity of our real property title laws, and fight back against abuse of due process and lack of adherence to the evidence code and rules of procedure.

Volunteer for the Greg Wohrle Foundation

Designated as a “Super Lawyer” by Thomson Reuters

Designated as a “Super Lawyer” by Thomson Reuters

Contact Us
Practice Areas
Client Reviews
★★★★★
Mr. Rosen was recommended to us by our friends and we highly recommend him for his excellent service. He represented us in the matter of foreclosure defense. His comprehensive and detailed knowledge of Florida law, federal law, and ongoing relevant cases was key to building a robust and winning strategy for our case. He presented us with several options and the risks associated with each, but ultimately, we picked the one that worked best for us. Mr. Rosen and his legal team are highly professional and always easily approachable via phone or e-mail. Once again, highly recommended. Jadwiga M.
★★★★★
In a few words, Evan Rosen saved my house. He got a final judgment in my favor. The judge gave the bank many opportunities (continuance of the trial even a mistrial) to solve all the issues that Evan Rosen will bring up to the judge (issues that were wrong with my case). In the end, his arguments could not be overlooked by the judge and Evan won the judgment in favor of the defendant (me) and an involuntary dismissal of the case. If you want to have the best chances to win your foreclosure case, you need Evan Rosen on your side. He is the Super Lawyer. I have seen him flying out of the courthouse. Oscar D.
★★★★★
I am so grateful first to god and for the blessing of putting attorney Evan Rosen and his team of professional, in our lives. If you are going through a foreclosure and don't know what to do, I can honestly tell you that attorney Evan Rosen is the person to talk (855-55-Rosen) he takes his time to hear your situation and never sugar coats anything and he does not give you false hope. He is an attorney that you can be sure will fight the fight for you. I know nowadays it's hard to find an attorney that you can trust, but know this, you will not regret the day you choose him. Julie D.
View More
Submit a Law Firm Client Review